“And into the forest I go, to lose my mind and find my soul.”

I know that I have used this quote before, but it speaks so much to why I hike. I don’t think I need to explain, the quote says it all.

We have been blessed with weather this weekend that has been just about as good as it can get. I didn’t get up at my usual five am this morning to hit the trail but instead waited until just about 11:30 am. With a starting temperature of just around 80 degrees, it was much warmer than I was used to, but also noticeably cooler once you got into the woods. A strong breeze was also blowing, making it seem even cooler.

Since I just did this hike the other day, I won’t bore you with the particulars of the hike except that I was moving much faster than the other day. I don’t what the deal was, but I felt much better than I did on Friday.

So instead, I took pictures of different areas of the Brown Trail to share with you. 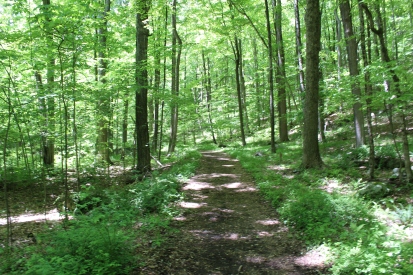 At certain points, this trail runs parallel to a stream, which due to recent rainfall was still running quite strongly. In a few weeks, it will slow to a trickle if the rain stops falling.

2 thoughts on “Back On The Brown”