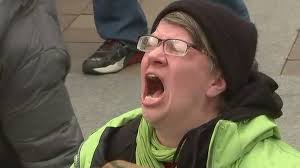 Someone in the “resistance” screaming at the sky. Oh my…

A quick question for my friends on the left. What is the purpose of harassing Republicans and members of the Trump administration in public? Do you not see how childish you look? How infantile? Since election day it has been a temper tantrum thrown on a daily basis because Trump was elected.

So what exactly are you hoping to accomplish by not allowing public figures to live their lives in peace like everyone else?

Do you honestly believe that screaming and accosting people in public is going to help your cause? I know that when I was growing up, yelling, screaming and stamping my feet like a petulant two-year old never succeeded in getting me anything. At some point I realized that and grew up.

Does it soothe your ego to verbally accost people who have been put in place by a duly elected President? (Sorry, we don’t elect the President by popular vote)  Does it make you feel good?

The behavior shown by those on the left since election day has truly been disgusting, and I think that is an understatement. The crying, screaming and ridiculous histrionics have done nothing but further alienate the two parties and quite frankly, made the left look like the unhinged loonies they profess the right to be.

Any rational answers out there for such moronic behavior?

And that, dear friends, will end my rant for the day.

As always, if any of this offends you, I don’t care.